Today, I will tell you a story.

This story is about a young boy, whose name is Jose Javier Herrera Grefa. Why is this boy so special?

Well, it all started earlier in July 2013, when I was in Pacifico de villa with the lovely July group. It was another day of placement in the community and we were just about to have lunch. Daniel walked in with a tall guy, sat down with him at a table, gave him a lunch and was talking to him all lunch. Later on Daniel came over to our table, and said that he saw Jose outside the community centre and invited him in for lunch. Jose was just a curious bystander wondering what these crazy canadians were doing in the community centre.

I met jose briefly that day. I heard his story, that he had just moved to Pacifico a month and a half ago, and was living with his uncle and aunt. After mentioning to Larry (Boss man) that we should invite jose tomorrow for the health campaign, I soon realized he had already thought of doing that.

The next day, we had our health campaign (Check out blog from July 12th). Jose is in one of the pictures BECAUSE, as soon as he arrived that day, he just took in charge. He was responsible for the registration of everyone who came to our event. I joked around with him as much as I could in spanish, and watched as he would inform everyone about the event, and tell them to register, and basically commit to this job he has been given, without even asking any questions. He just made himself a part of what we were doing. And I admired that.

Since that day, Jose joined us everyday. Seeing his lovely smiling face brightened up my day. Within a week he had made relationships with many of us.

His message was simple, give the love you wish you receive.

He interacted with the kids, he interacted with the volunteers and most of all, he had found a sense of belonging in Pacifico. Why do I say that? Well as our relationship grew, I found out that in the past month that he had been in Pacifico, he didn’t enjoy it much because he didn’t know many people. (No one likes to move). I was happy to know that joining SIAs vision gave him a sense of responsibility, and belonging that he had hoped for.

Jose, joined the program Leaders de villa and was a part of hosting an event and doing an amazing presentation on garbage for the community members (In August). He was a committed student of the english classes we held. He also started working with Youth in Action and helping with Daniel. It was that simple.

As other groups came down, we saw jose’s leadership skills rise day by day. He was a part of everything we did. I spent my last month and a half of summer with him everyday, and saw him grow so much.

So, why is jose so special?

Because he proves that life is full of surprises. It is not a surprise to me that he is like a little brother to me and many others who have interacted with him in the past few months.

What I have learned from him is that you should be open to any opportunities that come your way. Treat everyone with respect, love, care and affection. Tell everyone they are beautiful. Commit to the things you truly love. And that love really needs no translation. 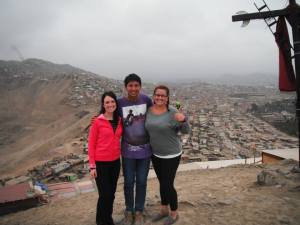 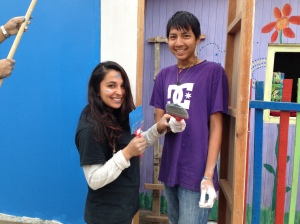 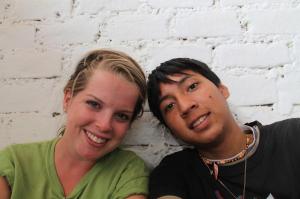 “A Loving heart is the beginning of all knowledge.”

Technology is the one thing that keeps us so connected. When I woke up yesterday, I looked down at my phone and I had received a voice note from my lovely friend Daniel, who runs Youth in Action in Pacifico de villa. YES.. a voice note… way better than an e-mail or text, (Whatsapp is amazing).

It was amazing to hear the excitement in his voice as he told me that they were all preparing for an event. An event about spring, and the youth in action kids had prepared a lot of things for this event. The event was called “Primavilla – Primavera en Pacifico de villa.”

It was even better to be able to see the pictures on Facebook that they had uploaded from the event which i’ll share here. 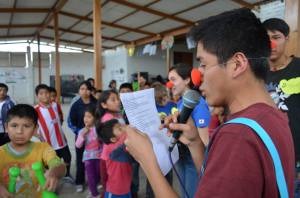 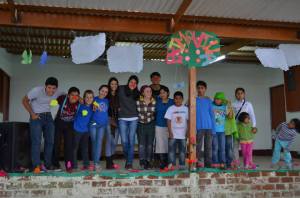 We are all so proud of all that our peruvian SIA team is achieving in Pacifico. I know that all of us past participants reading this, wish to be back there….but technology keeps us connected! I am so thankful for that.

Looking forward to being back, and seeing familiar faces. You can officially apply to be back in Pacifico de villa with SIA next summer, go to http://www.solidarityinaction.ca

In late August, we came across a fellow named Diego who was passionate about photography and video making. I remember sitting down with Mayra (lovely lady from the Peruvian SIA team), and Diego, talking about what we would like to portray in our promotional video. This turned into a very meaningful conversation about what SIA does for people. Do we help people realize something? Do we give them an opportunity to gain personal growth? We had to figure out what it was that gives people amazing memories each time they come to Peru with SIA.

One thing we all came in agreement with was the quote “Sustainability is created by bringing leaders together to inspire change”… hmmmm… what does this mean? Do we automatically attract leaders? Maybe.. but SIA helps with empowering people to become future leaders! I don’t think I was aware of my leadership skills until I emerged myself into an experience that was out of my comfort zone.

Inspiring change…inspiring change… it makes sense! Think about how many different minds,opinions and perspectives come across SIA when so many wonderful people join us. You can go your entire life looking at something one way..and one person can come across your life and make you see it in a whole different way. So we’re waiting for your new ideas!

Be the change you want to see in the world.

There were a few things that happened this summer as a result of fresh ideas in someone’s mind.

Check out our video on http://www.facebook.com/SolidarityinactionInc page! I hope it speaks to you, the same way it does to me.

Everything happened so fast. The progress that I, alone, was able to see in Pacifico since July has been miraculous. I remember coming home on Aug 31st and wondering where the summer went. We did so much but it felt like such a little amount of time.

Starting the month of September has been a breath of fresh air, its like stepping out on a spring day and just knowing, good things are ahead. This also means, work work work! SIA and its devoted members have been working non stop to develop projects for the next year! The month of September is all about promotions.

In order to achieve the goals that SIA has, we need people to KNOW about SIA first. Makes sense right? This is one of our biggest challenges…sharing our passion and introducing it to a stranger. Back in the summer, I remember telling someone that SIA is like our baby…haha.. We put our time and care into SIA, and all we want is someone else to treat it the same way we do.

Just last night as I sat at Breanne’s house (Who is now SIA’s new marketing coordinator CONGRATS), I was getting excited about getting out there and telling people about SIA and the opportunity it can give to other people. We have a few solid plans that will help portray a gist of our passion, but the response from others is what will really test our knowledge. Knowledge of SIA, knowledge of our goals, knowledge of… ourselves.

“If you can’t explain it, you don’t understand it well enough.” – Albert Einstein.

All the lovely people helping with promotions should not have a hard time putting their heart into presenting the vision of SIA because well….we’ve lived it. And I am excited for other people to live this with us!